Raksha Bandhan goes back to Mahabharata when Lord Krishna had cut his finger, which then started bleeding and seeing this, Draupadi immediately tore a piece of cloth from her saree and fastened it to Lord Krishna’s finger to stop the bleeding. The piece of cloth then evolved into a sacred thread. Believing the cloth she tied a holy thread, Krishna promised he would protect her from all evils throughout his life.

A sister tying rakhi on her brother’s wrist and, in turn, brother promising to protect her is what Rakshabandhan is all about.

As a person who has bought up watching Bollywood movies, it’s evident how Indian cinema has influenced our minds and belief system.

It will be a lie to assume that Bollywood movies do not influence us.

Having said all that, let’s take a moment to remember some classic songs that celebrate this beautiful bond between brother and sister,

As and how I grow up I feel being born in the ’90s was the best thing that has happened to me. It was a good time for movies, songs, art and for the media to grow as a whole. The best music the best Albums and even the best cartoons were of the ’90s. Not saying that today’s music or cinema is bad but still in a way, I feel that the ’90s was the greatest time of them.

With that weekend vibe on fire, I felt why not pay a tribute to the best time of our lives and talk about the memories that we had with them. As a kid, I still remember how music was chart buster at 6 in the evening and how eagerly I used to wait for it.

The 90s was the time for Pop albums! Yes, kids, we had Music albums during the times. With that note, here are our top picks of the 90s songs that have made a mark and will always be evergreen.

1: Yaro Dosti by KK: I don’t think there is a single soul who does not remember this song! Whether it was the soothing voice of KK or the beautifully written lyrics that spreader the magic. The video of the school friends was a bust state to the nostalgia train that just sent you in that pleasant state that cannot be defined!
2: Bullah Ki Jaana by Rabbi Shergill: This song was undoubtedly way beyond its time, from the lyrics to the video everything felt perfect. A Sikh singing and playing guitar asking people about his identity while rooming in the whole country was how simpler times were.
3: Sayonee by Junoon: A lost band, but one of the best memories that I have of them is the song. It’s simple and yet it shows how much someone can be in love to write something so incredible!
4: Tanha Dill by Shaan: The soft voice of Shaan and the amazing lyrics of this song are enough to make you go on that long drive all by yourself. The music was calming and exciting at the same time. With Shaan’s smile and the wonderful music, the song had to be on our list.
5: Maheri by Euphoria: Let’s keep the best on for the last! An all-time favourite, with Palash’s voice and an innocent video. It was a hit in its time and still doesn’t fails to wow you whenever you hear! A Beautiful song composition that will make you fall in love all over again.

Here’s to all the nostalgia and Flashbacks!
All in good times!

Have you ever just been in the state of such delight and trance that the world around you seems to be closing up and it’s just the music and you. The very moment where you don’t care about the world or what is next and you just swirl and bounce to the jam with thousands of other just like you.

When I was in school and used to live off on pocket money, I made a pack with myself. That it doesn’t matter what happens I will attend at least one concert a year! A concert is not just about music or your favourite artist playing! It’s about a million other small things that make the entire experience so spectacular that you remember it throughout! From dressing up for the night to dancing and jumping till your feet hurts, it’s all there in THE MOMENT!

It’s without a doubt, an experience of a lifetime for music lovers! So today we are going to talk about the top four best music fest happening in India that you should not miss! Or at least try to attend one of them!

Sulla Fest, Nasik: Well if you love Music and wine the Sula Fest is ‘the Fest’ for you. It takes place in Sulla wine yards in Nasik in February generally! They not only have amazing artist and of course an abundance of wine but also great food, remarkable fashion and many leisurely activities.

Sun Burn Goa: Its Asia’s largest Electronic Music Festival that lasts for three days. It generally takes place towards the end of the year in December with not just music but also entertainment, food, shopping and beaches! They have had some amazing artist in the past few years, promising bigger and better every time!

NH7 Weekender: If you are an Indie Rock Person then put this fest on top, of your bucket list! NH7 Weekender is called to be one of the best Music fests in India. You will get the best performances of Rock, Indie, Metal and fusion of ethnic music. A beautiful mixture of remarkable Artists, food and drinks!

VH1 Supersonic, Pune: A ‘Must go’ music fest that is held in February in the city of Pune. The fest has an amazing vibe to it with versatile artists from all over. You get multiple genres from Jazz to Pop and from Hip – hop to Indie Rock.

When you are a music lover, you need everything to be at its utmost precision. Music is not just instruments and words together! It’s also the right amount of flow of music at the right time. If you are more geared toward serious music then having sound tower is the best option for you. These beauties are designed to provide you with a better sound system with complete stereo sound. They deliver a powerful full-range sound.

1. Quality of the music – Now when we are talking about music, the quality plays a vital role. With the sound tower, you get a better eminence then with any other speakers. Why do you ask? Well, with these speakers providing much wider range and the design that’s complimenting for stereo music playback there isn’t much that doesn’t meet the eye and the ears. With all of this, it also gives more depth to the audio and has a stronger bass.

2. Versatility – you can trust the tower speaker for all types of audio, which can be playing the game on your console to watching a movie. They are extremely versatile and produce sound and audio of all type without losing the quality in it. Tower speaker is known for its superior audio quality and is good with almost all kinds of media.

3. Remarkable style – These speakers are designed in a quit Morden and a striking way. They are attention-grabbing and if you are looking for speakers that look good along with great sound quality, then Tower speakers are ‘The Thing’ for you. Put these speakers around your house entertainment system making the entire thing look classy, minimal and cool. 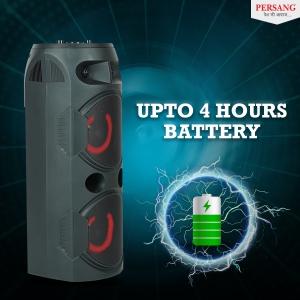